Is it realistic, do you think, that one day domestic abuse will end completely?  I’d like to think so but sometimes I wonder.

I was talking to a colleague yesterday and he was saying he didn’t want to end domestic abuse!  He felt that was an unattainable dream.  What he thought WAS achievable was to make it socially unacceptable.  And I think he has a point!

Let’s consider that 30 years ago, people, including me, were lighting up cigarettes in pubs and restaurants, trains, planes even.  Adults in their 20’s and 30’s and even older, would not remember when you could smoke on a plane or on the underground!  They react with shock and disgust.  Now, I can think of nothing worse than being in a restaurant with someone at the table next to me smoking.  My clothes smelling of smoke.  How did I even think that was ok?  But I did.  Then slowly but surely, people campaigned against people smoking in confined spaces.  It took years to do it but eventually, it has become socially unacceptable.  We are not allowed to do it but more than that we don’t want to do it!

I looked it up on the internet.  I typed in ‘socially unacceptable meaning’.  This is what came up…

Just like smoking!  Smacking children is another example of something that used to happen and no one thought anything of it, but is seen as socially unacceptable now and we are uncomfortably aware that it is not ok.  And of course, women being housewives!  Women not working, staying at home and being at their husbands beck and call.  This was socially acceptable.  When I am facilitating The Freedom Programme, I give out the following article which was printed in the ‘Housekeeping Monthly’ magazine in May 1955.  It was called ‘The Good Wife’s Guide’! 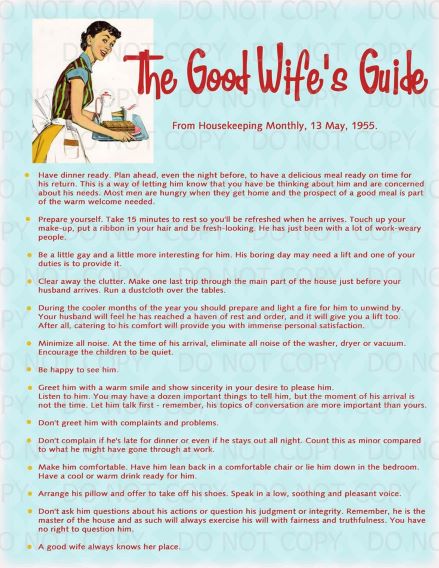 When I show the women who attend my programme, they laugh.  They can’t believe it.  Some think I have made it up.  But No!.  This was how our society felt women should behave in the 1950’s and 1960’s.  It took years for us, as a society to change our views about how women should behave and women’s groups and campaigners worked tirelessly to change the public perception.  To make this socially unacceptable.  And on the whole, it worked didn’t it?  Or did it?

Well, I think things have changed radically since this article was published.  But I feel it is this deep rooted societal perception of women and what their role in society is, that is at the heart of why some men are abusive.

So when I think about this, and about all the other things that we see now as socially unacceptable that we once thought of as socially ACCEPTABLE, I think maybe one day we can do the same with domestic abuse.  Sadly I feel that to eradicate it completely may be too high a mountain to climb.

We have come a long way but we have still got so far to go.  I hope that in my lifetime I see a day when the mention of domestic abuse shocks and disgusts everyone, like smoking on a plane does now!   But until then, I will keep working at it…..