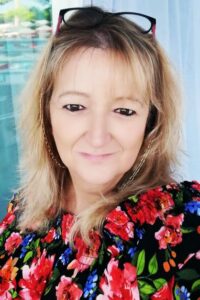 For the last 24 years Sharon has worked in the field of domestic abuse. Starting out as a volunteer for a local refuge service, she went on to secure a full time job for the same service.

She joined the Women’s Aid Federation of England, board of trustees in 2000 and went on to become the Vice Chair in 2002. Also in 2000, Sharon was involved in the writing of a book called ‘Getting Out’ which tells the stories of several English and American women who experienced domestic abuse and how they escaped those relationships. Sharon’s story is Chapter 8! You can find this book and the link to it on this site.

Sharon Bryan specialises in survivor consultation and intervention, risk assessment, facilitation of The Freedom Programme and Multi-Agency training.  She also trains student social workers and offers supervision to other professionals who work with women who have/are experiencing Domestic Abuse.  Sharon has extensive experience of delivering consultation to Social Workers and Child Protection Chairpersons.  She is a qualified IDVA and sat on the Westminster MARAC panel for 14 years. She is an accomplished public speaker and has been involved in media work including being on television, radio and writing numerous newspaper and magazine articles. She has also been an expert witness in criminal and civil courts of law.

In January 2021, Sharon embarked on the next chapter of her career by joining the award winning NCDV (National Centre for Domestic Violence).  Here she is the ‘Head of Partnerships and Development for Domestic Abuse Services’.

Sharon was awarded the ‘Survivor of the Year” Award in 2012 by The Women’s Aid Federation of England in partnership with Avon and Marie Claire magazine.  She was also nominated and shortlisted for the Emma Humphreys Memorial Prize in 2015 for her services to women experiencing domestic abuse.

In September 2020 Sharon also took the next step of incorporating her passion and commitment and launched Sharon Bryan Consultancy Community Interest Company.  She manages this in her own time and fundraises locally and nationally to be able to provide The Freedom Programme to women who have or who still are experiencing domestic abuse.  Sharon also works hard to raise awareness of domestic abuse, locally, nationally and globally.

Sharon is a survivor of domestic abuse. 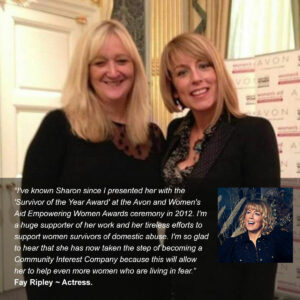