With the latest news that Harrow Council are funding ‘couples work’ for cases where there has been domestic abuse, let us hope that they embark on this work with the utmost care. I feel that this is something a lot of local authorities will be doing in the pursuit of cutting down on their already limited resources.

It has long been the opinion of every trained domestic abuse practitioner, that this type of intervention is at best ill advised and at worst, extremely dangerous. If you ask any woman that has experienced domestic abuse whether this is what they would have wanted to do, they will react with horror!! Domestic abuse is not about couples disagreeing. It is about one person’s power and control over the other. This means that effectively, if you put these two people in a room with a therapist or similar, the person that is or has been abused will not feel able to say what they really want to say, for fear of repercussions later. And if that person does say what they want to say, they risk severe repercussions later! That takes away the purpose of couple intervention completely because the sessions are one sided.

I would really hope that this is taken into consideration and that as a bare minimum, both parties are fully risk assessed before a decision is made whether they are suitable for this work.

This month saw the coming into force of new legislation around coercive control. Coercive control has now been criminalised as an offence under The Serious Crime Act 2015.

This criminalisation of psychologically abusive behaviour provides an important legal protection to domestic abuse victim/survivors, who have previously been left vulnerable when experiencing non-physical abuse. The legislation is an important step in ensuring that domestic abuse is more readily recognised and it will provide support to criminal justice agencies such as the police, which have often struggled to respond adequately to non-violent abuse.

Traditionally, domestic violence has been understood to be isolated incidents of physical violence perpetrated by a partner or ex-partner. The term coercive control emphasises that it is not about fights, that abuse is on-going and that it comprises much more than physical violence. This is not to say that verbal and/or physical fights do not take place between partners, but it is important to distinguish between these and the social concern that is domestic abuse.

Even when we acknowledge the emotional, psychological, financial and sexual elements of domestic abuse, as practitioners we still focus primarily on acts of physical violence in our discussions and responses to domestic abuse. Talking about coercive control helps us to rethink what constitutes domestic abuse.

So, today was the last session of my current Freedom Programme Group. It has been running since September (12 weeks). It has been very successful and most of the women who attended were sorry it had come to an end. I always try to run the programmes with humour and informally. I think this puts women at ease and helps them to feel more confident in sharing their stories, although, of course, there is no obligation for anyone to talk about what has happened to them. That being said, most of them do want to as they gain such marvellous support from other women who they feel understand how they feel and what they have been through.

Today was a celebration of their achievements over the last 12 weeks and we had a feast. One of the women made delicious Singapore Chicken Noodles with lemon wedges. Another brought in Christmas Chocolate Yule Log cake. We had mince pies and vanilla doughnuts and most importantly a fun time.

I shall miss them all and am very proud of all of them.

Have to share this picture of the Singapore Chicken Noodles. What a way to end a brilliant group programme! 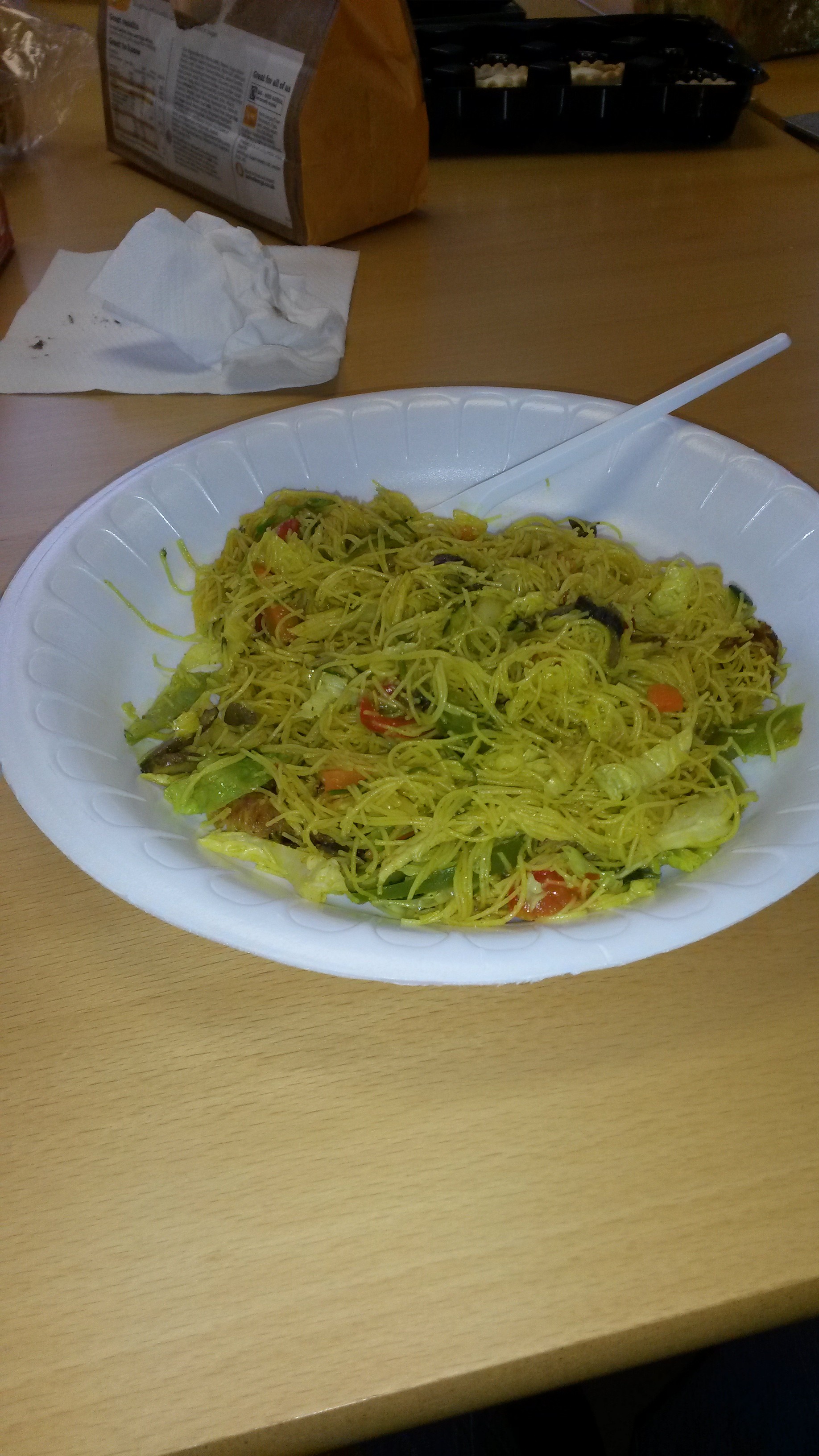